The first thing we perceive when taking land in Lanzarote is the great beauty that these lands have, as if it were an authentic pictorial work, we can observe an amalgam of tones and colors that varies from the pristine white of those houses, through the turquoise blue of the coast to the black and reddish lands near the volcanoes, without forgetting its golden white sand and the green of its enigmatic landscape.

Lanzarote is a small, Macronesian island where nature, art and tourism form an inseparable union. The island is famous for its incredible beauty; with pristine white houses, turquoise coasts, golden-white sand and enigmatic green landscape. The sun honors us with its presence throughout the year, letting us admire volcanic landscapes reminiscent of the Martian surface. From its arid landscape emerge the best wines of the island, many of them famous and known throughout the world. 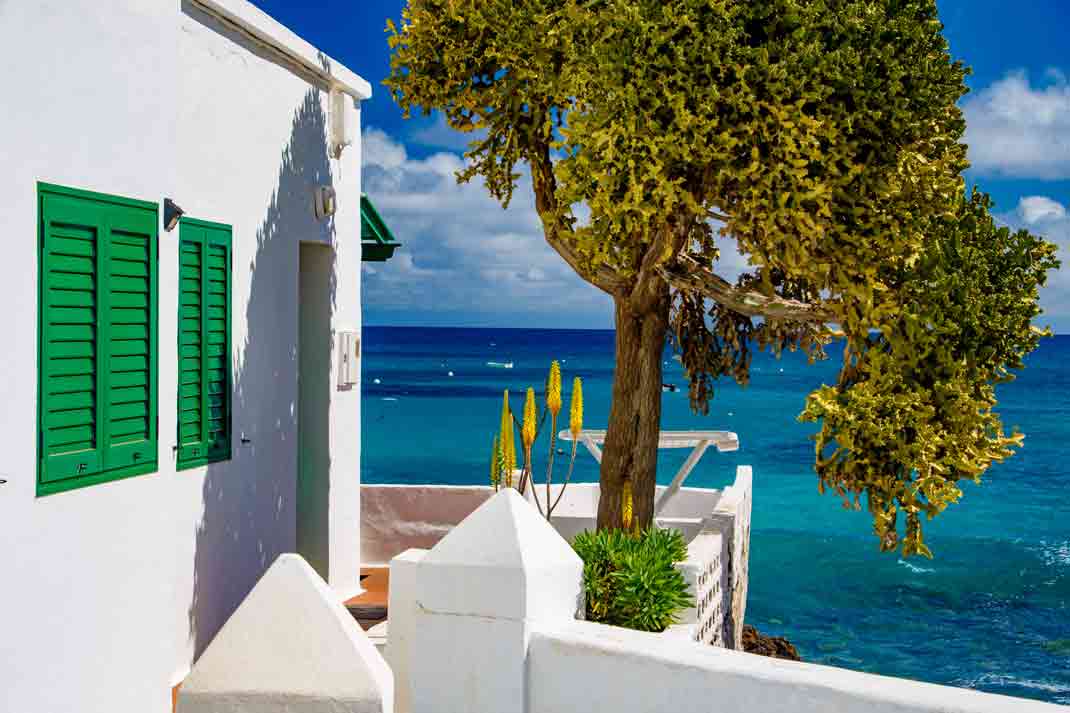 Lanzarote invites you to delve into its nature; its people, festivals, and popular customs.  Let’s start our journey!

Sun, volcanic landscapes, and the best beaches of Lanzarote

Lanzarote boasts fabulous beaches, suitable for all tastes, along the coastline of the island.

Playa de Papagayo: the beauty of the calm

In the southern region, Playa de Papagayo is one of the most famous beaches on the island. It’s a small, natural bay shaped like a crescent, boasting white sands and calm water thanks to its sheltering cliffs which turn the cove into a natural pool. 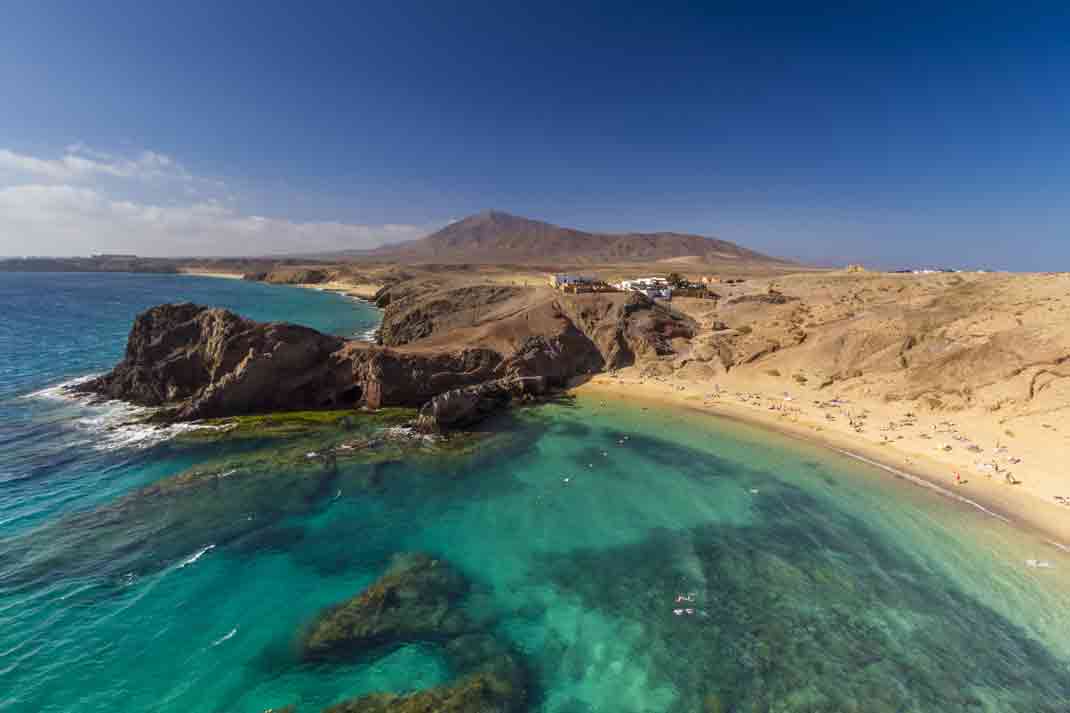 Playa de Papagayo is ideal for scuba diving or snorkeling; and also ideal for children because it has no waves.

In the northwest you’ll find the “blondest” beach, thanks to its golden sand, with a large area of almost 5 kilometers, located in Parque Natural del Archipiélago Chinijo. 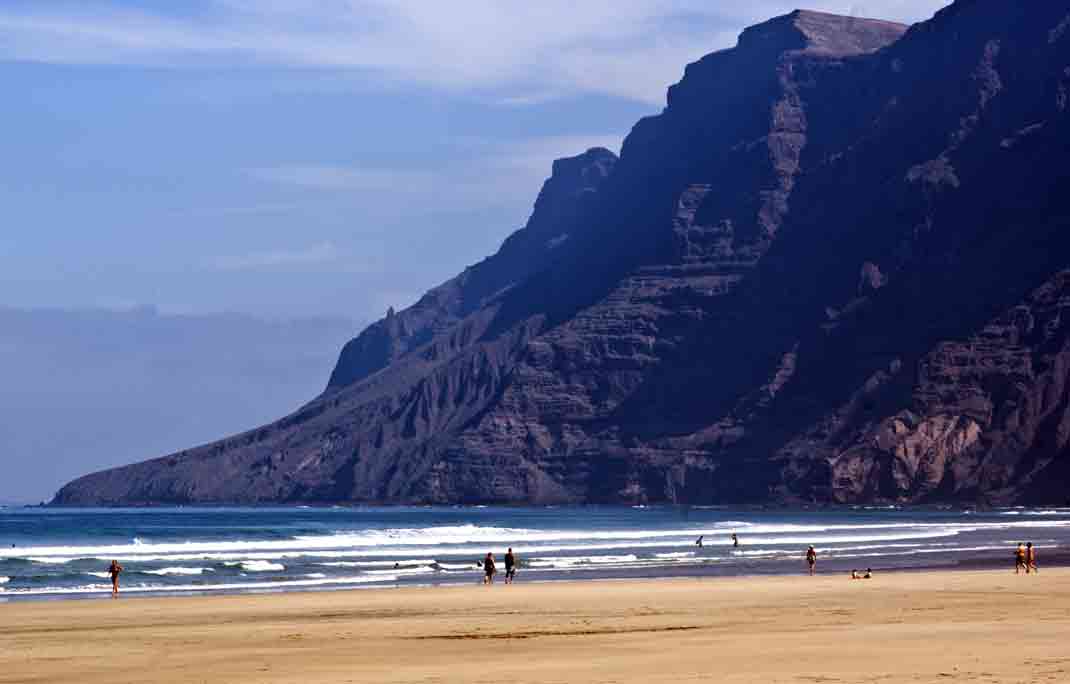 Unlike the gentle waves of Playa de Papagayo, Famara is a wild, natural beach perfect for surfers and lovers of water sports. In its crystal clear water you can practice various sports such as kite surfing, windsurfing, bodyboarding, kayaking and even wind sports such as paragliding and hang gliding.

The natural pools of Los Charcones: a hidden secret spot

If it´s peace, relaxation and harmony that you seek, there is no better therapy than visiting Los Charcones. A natural pool of sea water, it’s a hidden gem, far from the hustle and bustle of more populated areas of the island, with crystal-clear water of incomparable beauty. 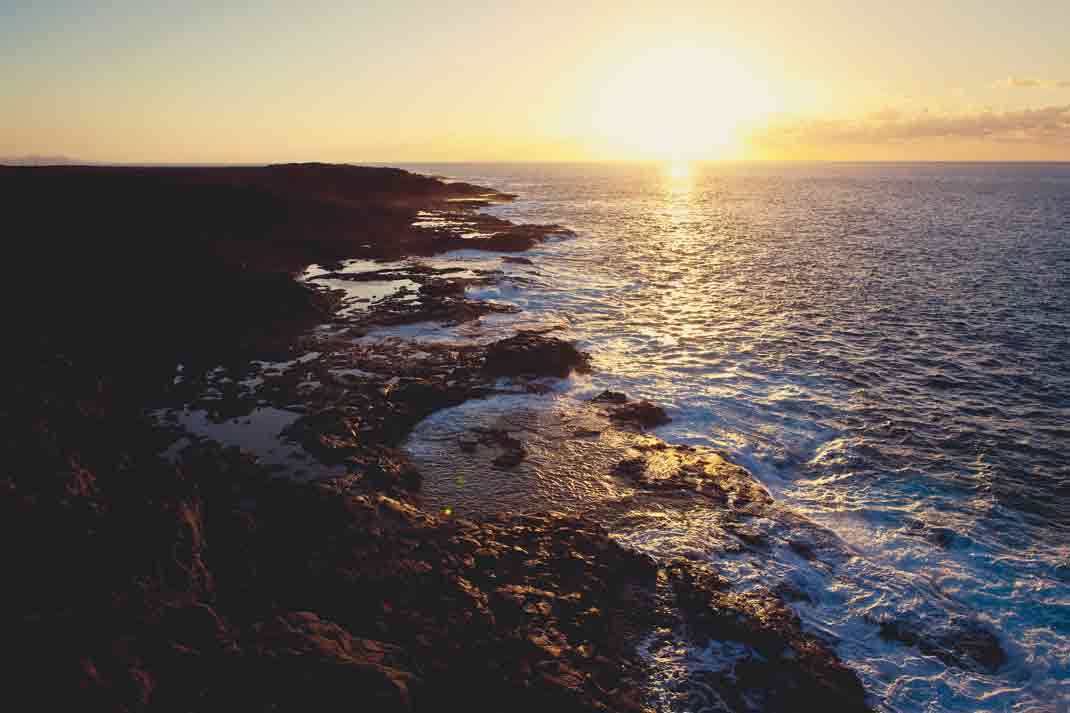 Another impressive natural pool is Cueva del Agua, approximately 10 meters in diameter, popularly known as La Olla (the cooking pot). Its an authentic paradise consisting of natural stone and little vegetation. The silence will invite you to delve into the interior of its cave, but the bottom is rocky and contains sea urchins, so we recommend you wear water sandals.

To reach Playa de las Conchas you will need to hop a ferry from Puerto de Órzola. In only 20 minutes you can reach this paradisiacal beach, and spend an incredible day enjoying its 500 meter long coastline and incredible width. 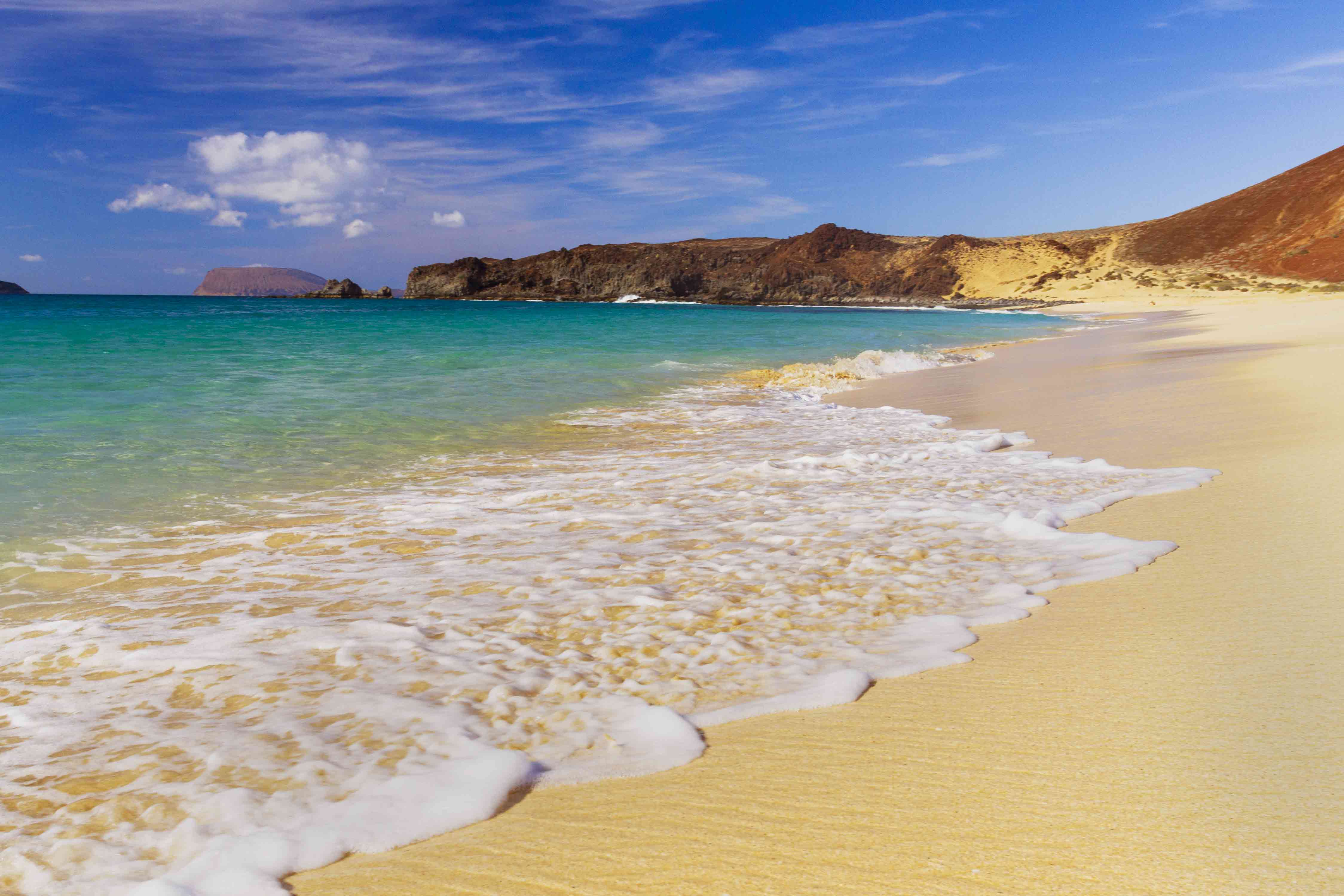 Upon disembarking, you’ll find a line of Jeeps that go directly to this popular beach, and they will pick you up at any time to return you to the port. More adventurous visitors can rent a mountain bike, but you have to be in good physical shape.

Thanks to strict rules on what can be built on the islet, Playa de Las Conchas is far away from civilization, providing a sense of overwhelming tranquility. According to the locals, be careful when bathing as it has strong swells.

The locals call this area “playa blanca” (white beach). It is a beach more than a kilometer long with a width of almost 20 meters. It’s a crowded beach where, after bathing, you can enjoy extensive services such as gastronomy, shopping areas, leisure activities for children, and various sports products . 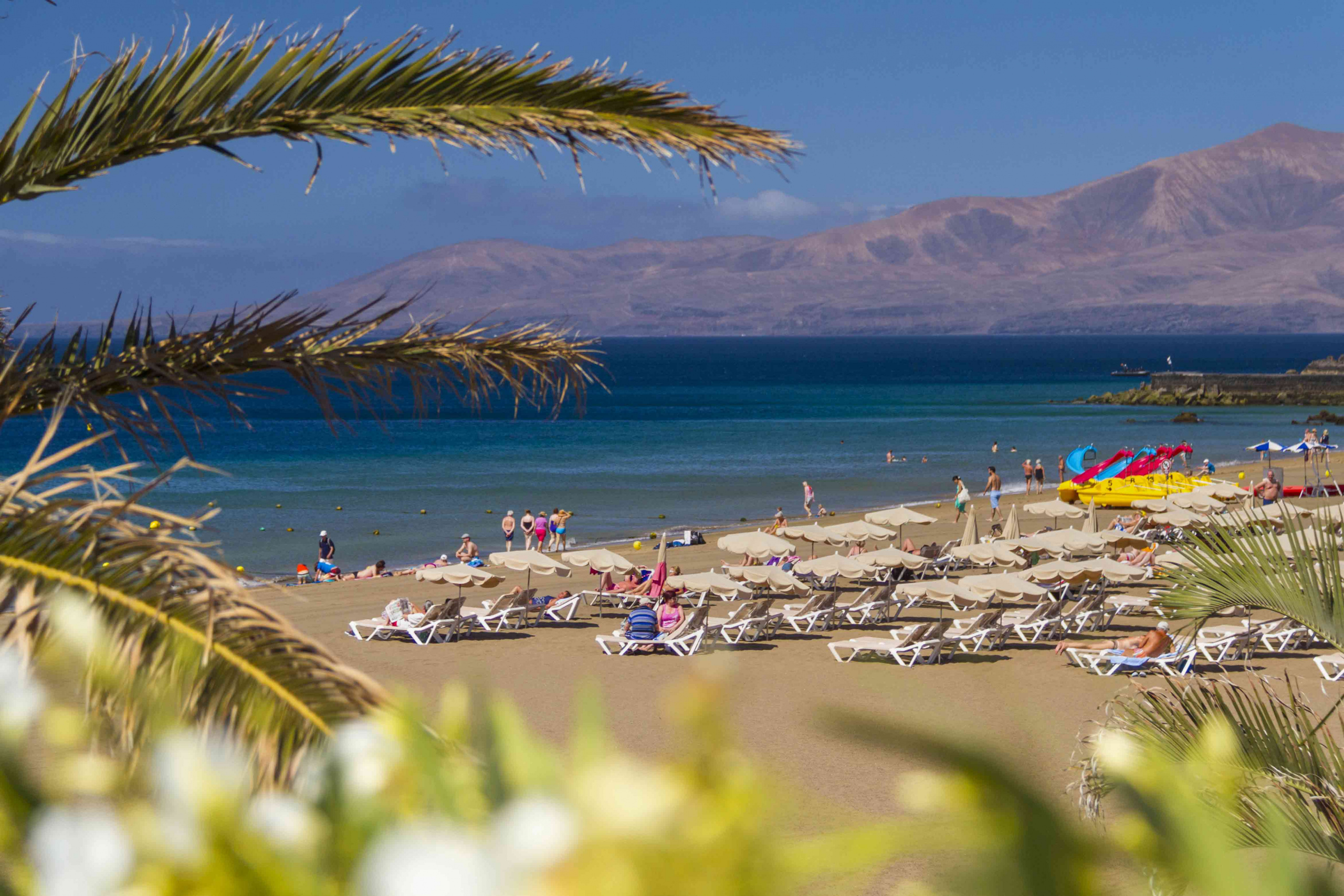 To observe the raw power of Mother Nature, travel through Lanzarote’s volcanic landscapes. 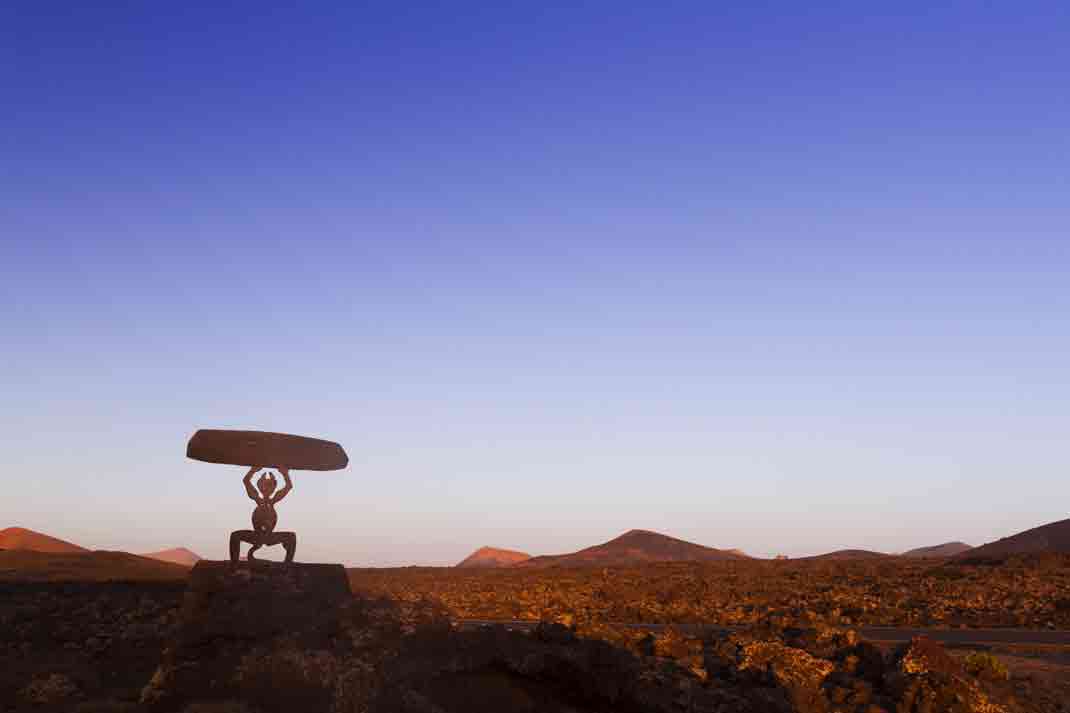 Known for its silence and desolation, Timanfaya National Park is a Martian landscape comprised of more than 25 active volcanoes and volcanic features. Our favorite spots are Montañas de Fuego, Caldera del Corazoncillo and Montaña Rajada. The red and ochre hues and elevated temperature reminds visitors the Earth’s powerful heart beats meters beneath the surface. 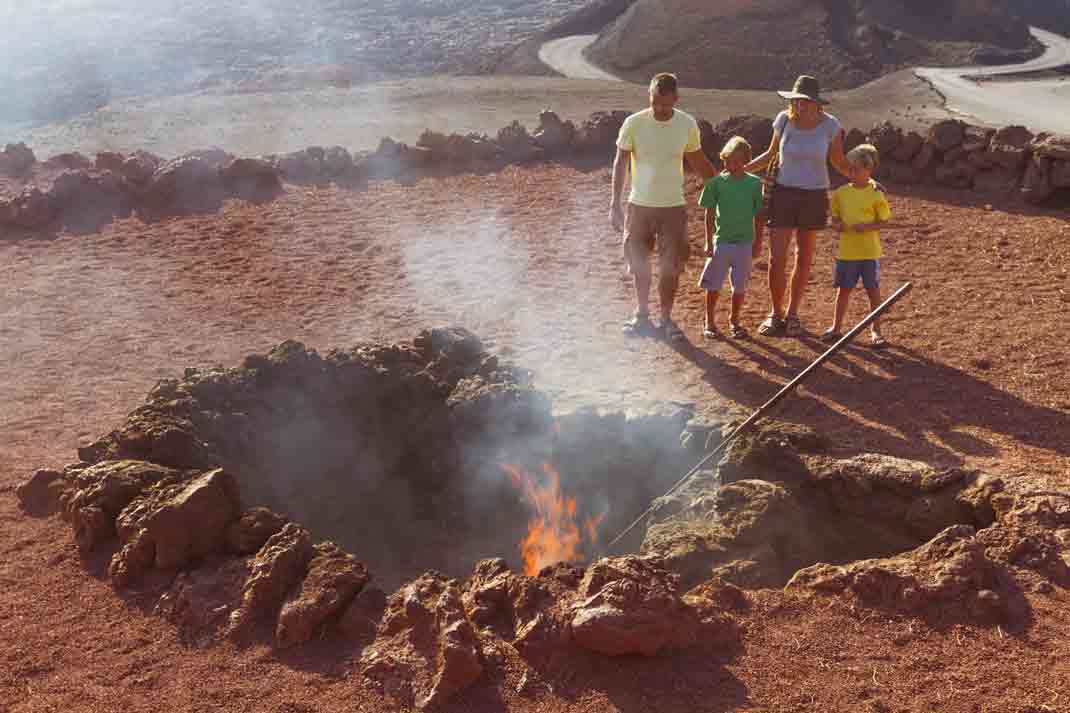 When Timanfaya erupted in 1730, the earth opened up and buried, according to local testimonies, 9 small villages, which gives us an idea of the extreme nature of the island. It’s not suprising that Timanfaya has become the second most visited national park in the Canary Islands. 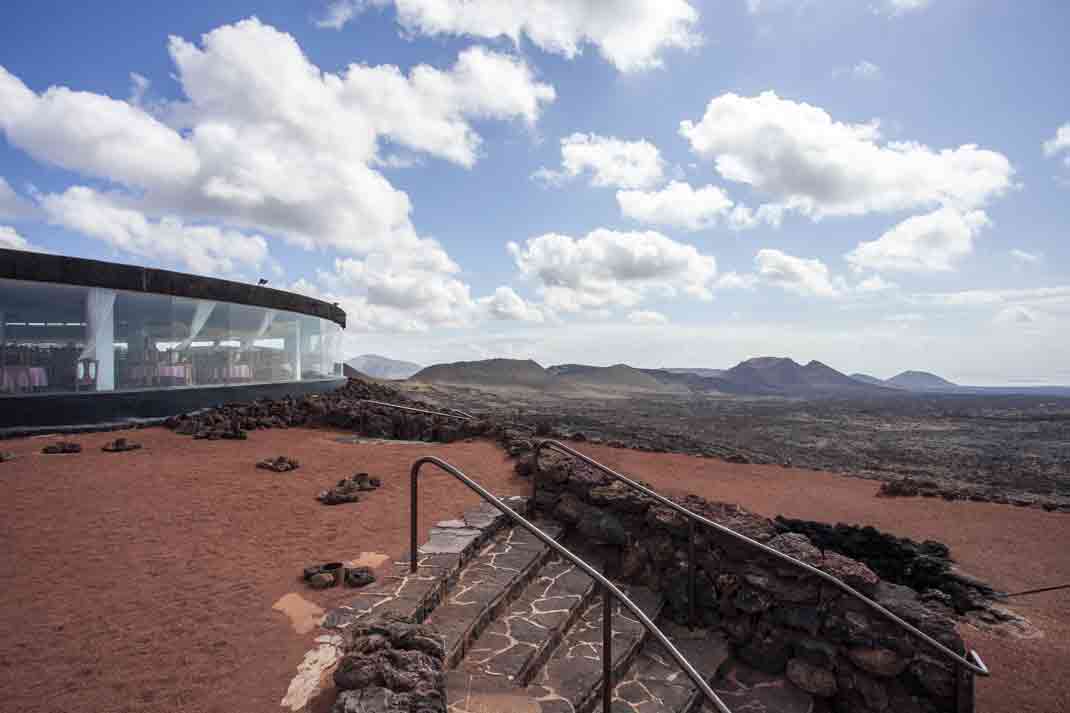 Located in the northern municipality of Haría, Volcán de la Corona lurks as an imposing silhoette on the Lazarote horizon. Declared a Natural Park in 1987 and reclassified as a Natural Monument in 1994, the volcano features a sea of petrified lava and shares the park with two smaller volcanoes, Quemada de Órzola Volcano and the La Cerca-Los Helechos-La Quemadita volcanic complex.

The town of Ye, located on the volcano’s slope, is an ideal starting point to hike its six hundred meter summit, witness the crater, and enjoy breathtaking views. On your descent, be sure to explore the “badlands” with its hidden volcanic tubes and beautiful holes created after the collapse of their roofs.

If you are searching for the perfect photo to upload to your Instagram account, Montaña Blanca is one of the best choices. 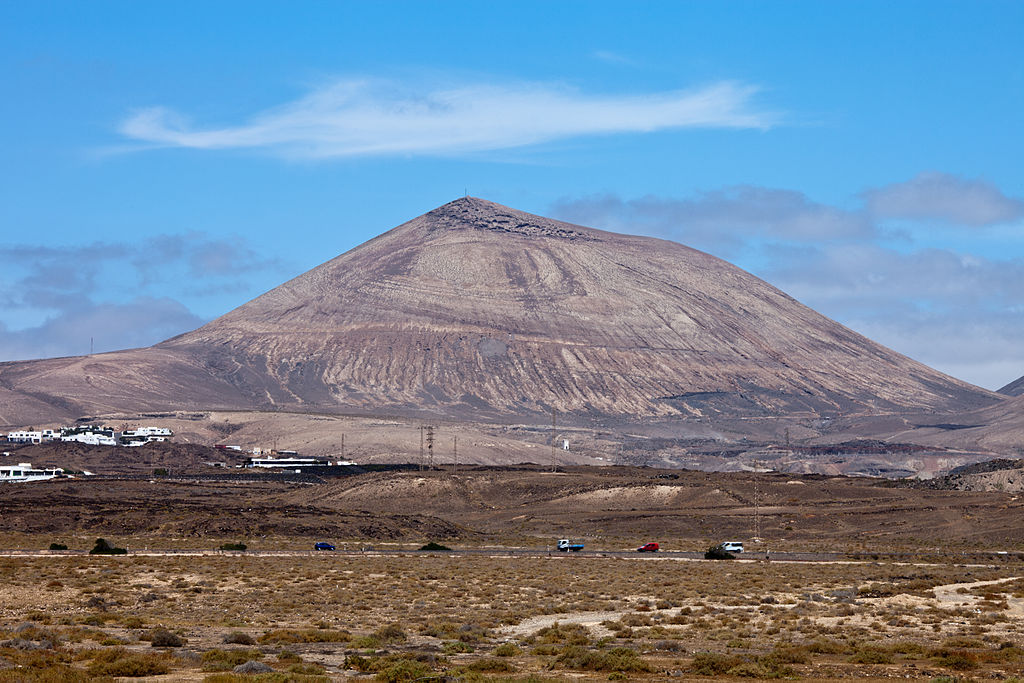 Montaña Blanca is the largest volcano on the island, 600 meters tall, located in the very center of the island. The trail to the crater has a fairly comfortable ascent which winds past lava fields and several smaller volcanic “islets”. Upon reaching its summit, crowned by a cross, you can glimpse the entire coast of Lanzarote and part of the neighboring island, Fuerteventura.

People and culture: the affable character of Lanzarote’s people

Each village has a magical character that has been shaped by the various eruptions that created the island’s current landscape.

In the insular territory, its people and settlers have adapted to the island’s wild nature. Some emblematic places that we advise to visit are localities like El Golfo for its eminent marine character. 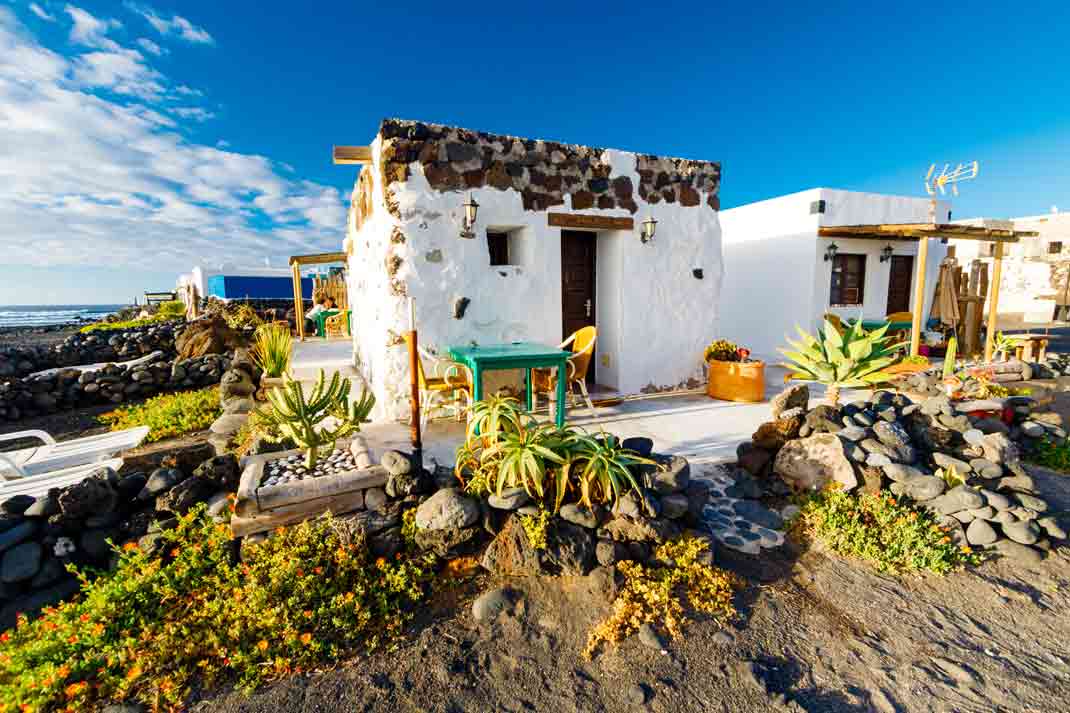 Traditional Canarian architecture shows its best face in the town of Yaiza, located on the very edge of past volcanic eruptions.

If you prefer a spectacular historic center, the town of Teguise is a stately space which is ruled by the nobility. Every Sunday, its market attracts local and international visitors. 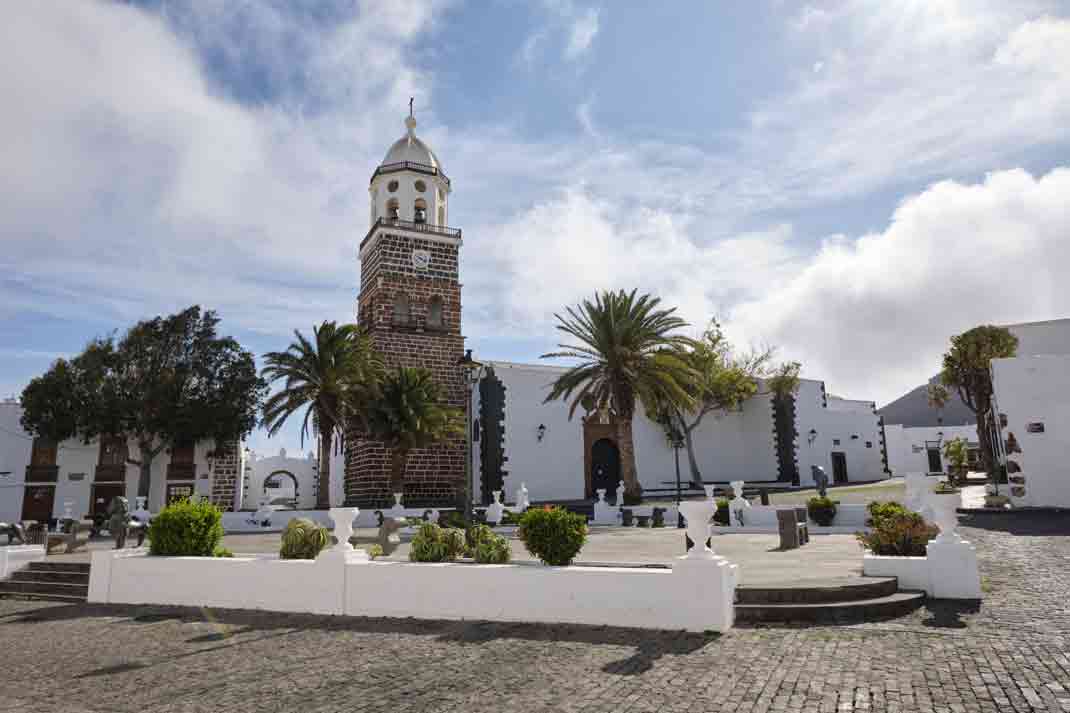 And of course you must visit one of the greatest attractions on the island, Jameos del Agua, a natural volcanic tunnel transformed by César Manrique into a natural auditorium with an interior lake. It’s an authentic spectacle of unparalleled beauty. 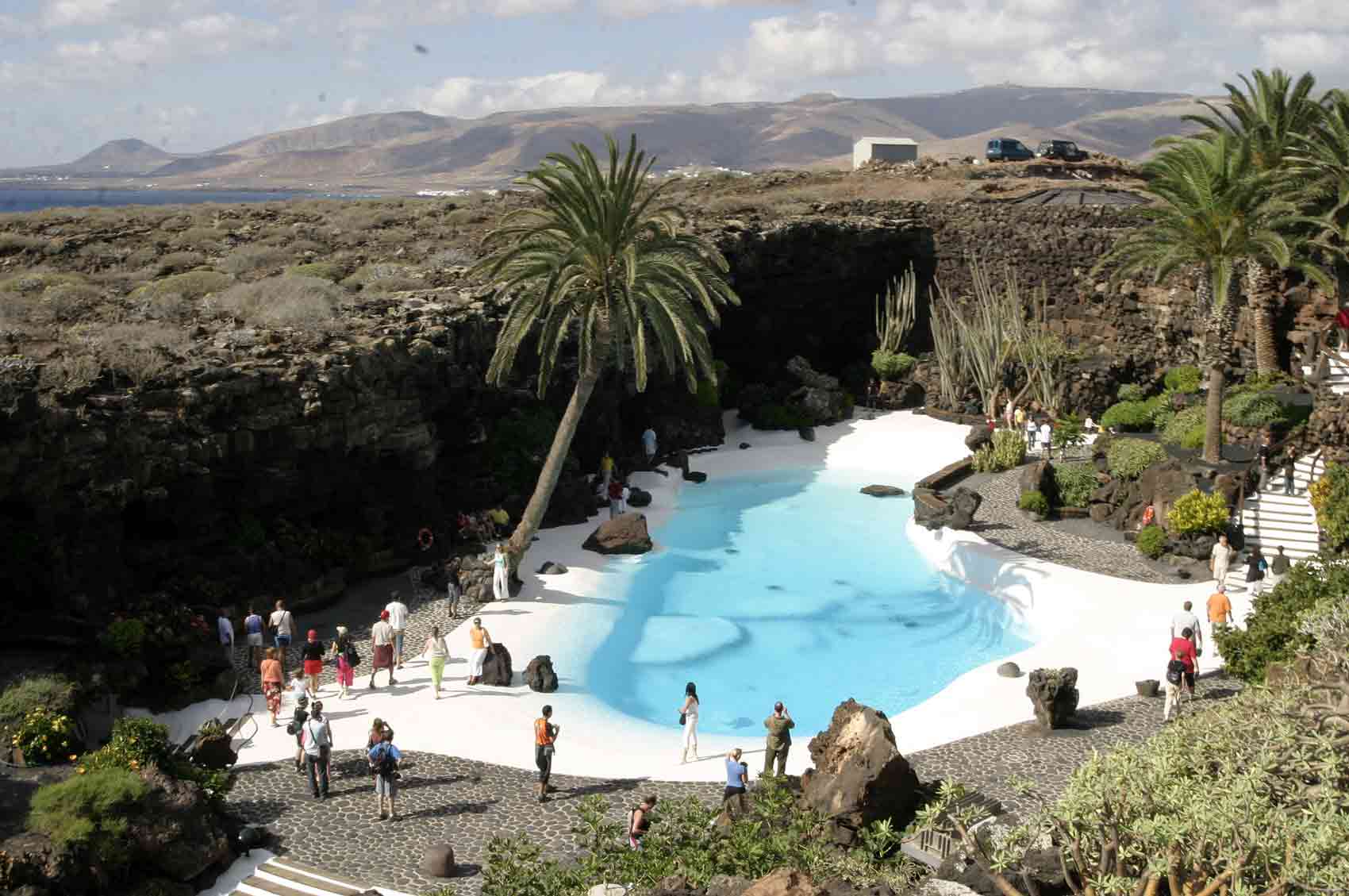 La Geria, located in the middle of a volcanic landscape, hides a very special feature. It often surprises visitors that a land which, at first glance, appears barren and calcined, is the perfect place to cultivate vines that produce an internationally recognized wine of the Malvasia variety. Its black earth, emerald green vines, and the stone semicircles that protect them provide a fascinating image. 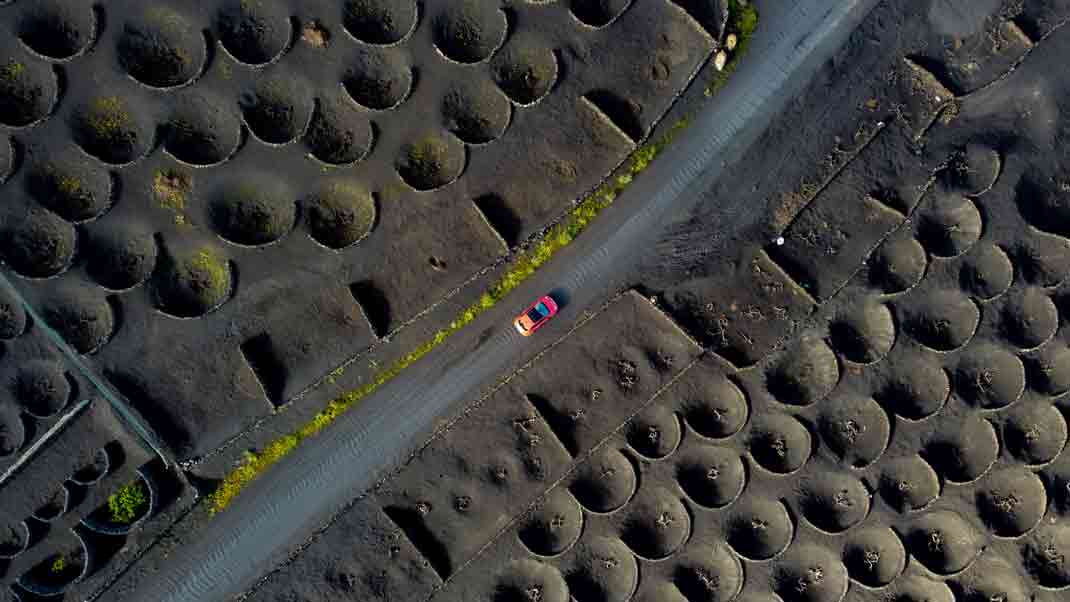 In addition to taking some incredible photos, take the opportunity to visit some of the wineries. During visits you can taste the local wine and purchase bottles to give as gifts or enjoy as a souvenir of your trip.

Popular festivals of Lanzarote and its cultural heritage.

Festivals and culture go hand in hand. To catch the pulse of Lanzarote’s cultural heritage, we recommend attending the festival in Mancha Blanca in the municipality of Tinajo. During September, pilgrims come from all the surrounding islands wearing native costumes and reenacting popular local customs.

Costumes and unparalleled revelry are concentrated during February in the Carnival.  Or if you’d prefer to attend a festival with a more religious character, attend the feast of Corpus Christi. During this festival, the inhabitants of Lanzarote dye the streets with colorful salt carpets which gives a picturesque appearance and allow visitors to take incredible photos. 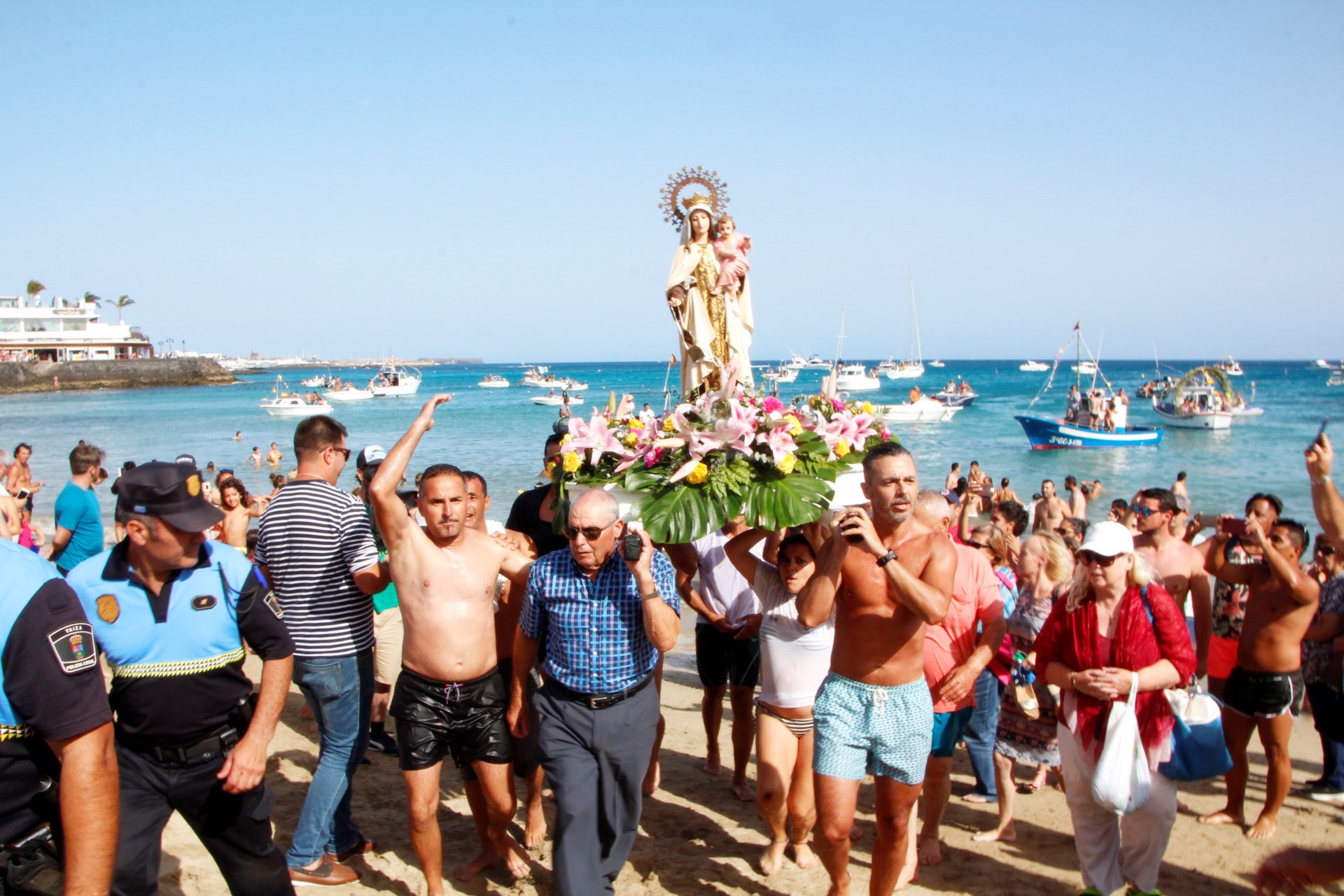 Lanzarote treasures its diverse cultural heritage. Visit the Museo Agrícola en Tiagua to learn firsthand much of the history and traditions of Lanzarote.

Another landmark that Lanzarote treasures is the José Saramago House. It was the residence of the famous Nobel Prize winner of Portuguese origin and has been converted into a library.

Finally, if you love Aloe Vera and its near-mystical healing properties, visit the Aloe Plus Lanzarote and Lanzaloe complexes which promote one of its typical plants, the Aloe Vera plant.

Find here the largest selection of hotels in Lanzarote:

Our favorite app to find the cheapest car rental in Lanzarote:

Enjoy this video of Lanzarote:

Routes, activities and excursions in Lanzarote:

Special thanks to @Brandcenter of the Canary Islands for the transfer of images.