The Archaeological site Gadir in Cádiz, shares a building with Museo de Títeres, near Mercado and the Plaza de las Flores.

It all started 3000 years ago when the Phoenicians came to these shores and, by entering trhough Playa de La Caleta, founded the town of Gadir. It is here, at the archaeological site, where we find the remains of that ancient city. A site considered the oldest of the western Mediterranean basin, and essential to understanding the history of the city of Cadiz.

The tours are free and are held in groups of 20-25 people, lasting approximately 40 minutes. They begin with an educational projection and then you will see two sections of stone and clay streets, and eight homes dating back to the ninth century B.C. You will also see objects and various goods of the Phoenicians of the sixth century B.C.

Along the route, there are numerous exhibitors with their corresponding marks, lighting the the areas to which they refer, as well as interactive tablets in which you can learn more about certain aspects of the visit. On one side of the floor there is a large video screen showing recreations of the old Cadiz.
It opens from 10 to 17h from Tuesday to Sunday, and can only be visited during day time hours. 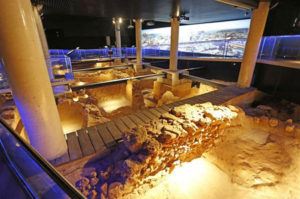 The Archaeological site Gadir in Cádiz, shares a building with Museo de Títeres, near…